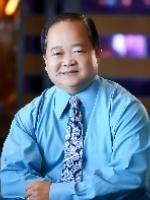 Councilor and Chair of Membership Committee

Dr. Bangasan is Board-certified in both Adult and Geriatric Psychiatry. Currently, he is the lone geriatric psychiatrist actively practicing in Kern County. He also has served as Medical Director of Kern County Mental Health (KCMH) for several years. Since the inception of UCLA-Kern Psychiatry Residency Program in 2005, Dr. Bangasan has been serving as an Assistant Professor manning primarily the Geriatric Psychiatry discipline, as its Course Coordinator and lecturer.
For the past close to 20 years, he sees adult patients in the outpatient clinic of Kern BHRS or Kern Behavioral Health and Recovery Services, (new name of KCMH), and is the lead psychiatrist of WISE Clinic, the geriatric arm of Kern BHRS. This is where the psychiatry residents do their ACGME-required 1 month of geriatric rotation, where they see these elderly patients not only in the outpatient clinic but also in the contracted various nursing homes scattered in the community.
Dr. Bangasan has been UCLA-Kern Psychiatry Residency Program’s Grand Rounds convener for many years up to the present time. Likewise, for the past 10 plus years, he has served as the Team Captain of Kern County Psychiatrists team in its yearly participation in NAMI Walk. He has taken active role in CCPS being its Kern Chapter President once. Also, at CCPS, other than being its treasurer for several years, he has Chaired different committees like Early Career Psychiatry, Membership and Geriatric Psychiatry, some of which he continues to serve as such. Currently, he is one of the Councilors of CCPS Council. He remains to be an active member of the group known as Philippine Psychiatrist in America (PPA) where he once served as its treasurer for 4 consecutive years.
He was bestowed the honors of being Fellow of APA (FAPA) in 2008 and 5 years after, or in 2013, he was given the title of Distinguished Fellow of APA (DFAPA).
He is a practicing anesthesiologist in Manila, Philippines before he migrated here to the US in early 1990’s. He’s been an Assistant Professor way back then in his own medical school, Far Eastern University -Dr. Nicanor Reyes Medical Foundation, lecturing in Anatomy, Histology, Pharmacology and Anesthesia. He has done numerous researches in pain management. And while preparing for his USMLE exams, he at the same time is working as licensed Clinical Laboratory Scientist in Bio-Clinical Laboratory in Torrance, California.
He likes reading, swimming, singing, walking, doing gardening in his backyard, and hanging out with his two daughters and wife on weekends.